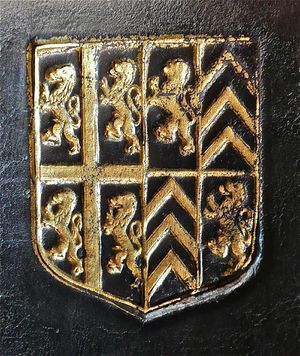 Matthew was a major figure in ecclesiastical and political affairs, particularly in the north of England, in the late 16th and early 17th centuries. Theologically, he was a Calvinist with a strong belief in the importance of preaching, of which he was an active exponent. As ambitious as he was able, be has been criticised for his pursuit of promotion and wealth, but he was always energetic in discharging his administrative responsibilities. He was vigorous in opposing recusancy in his dioceses, and in encouraging a network of effective protestant ministers.

Matthew acquired books throughout his life and by the time of his death he had amassed a library of over 3000 volumes. He recognised the value of books as essential instruments in his working life and he is known to have made his library to his associates as a necessary resource. He encouraged the development of libraries in various ways; he gave books to Christ Church, during his time as Dean, gave books to St John’s College, Oxford, and in 1602 gave £50 to the Bodleian Library. He also gave a quantity of books to the town library in Bristol (which he helped to found in 1615).

His books were bequeathed to his widow, who straight away gave them to York Minster where they mostly remain today. There is no contemporary catalogue, and the extensive inventory of Matthew’s goods drawn up after his death includes only a one-line entry for the books, valued at £600. The contents were strongly rooted in all branches of theology, from biblical texts to contemporary controversy, but also embraced history, classics, law, geography, mathematics, medicine and science. There is little which could be described as literature. The collection is noteworthy for its run of Frankfurt Book Fair catalogues, 1596-1623, demonstrating one of his means of acquisition; he was also able to acquire books through his role as a government censor. During his years in Durham, he acquired books which had previously been in the Cathedral collection. Examples: numerous in York Minster Library; British Library C.64.dd.2; Christopher Edwards catalogue 79 (2020)/137.

Matthew regularly wrote his name in his books, using “Tobie Matthew”, “Tobias Dunelm:” or “Tobias Eboracen:” as appropriate. He also usually inscribed the motto Vita Christus mors lucrum. He also used two armorial stamps, with his arms as Bishop of Durham or Archbishop of York.

Retrieved from ‘https://bookowners.online/index.php?title=Toby_Matthew_1544%3F-1628&oldid=22596’
Categories:
This page was last modified on 21 June 2022.
Content is available under CC BY-NC 4.0 unless otherwise noted.