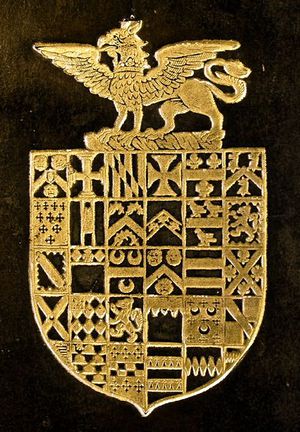 Born at Wentworth Woodhouse, Yorkshire, son of Sir William Wentworth, 1st bart. Matriculated at St John's College, Cambridge 1609, but did not graduate; admitted at the Inner Temple, 1607. After being knighted in 1611, he travelled in Europe. MP for Yorkshire 1614, the year in which he inherited his father's title and family estates. Continuing to serve in parliament through the 1620s, he sought unsuccessfully to achieve favour and promotion until made Viscount Wentworth and Lord President of the North in 1628. In 1632 he went to Ireland as Lord Deputy, with a remit to regularise government and taxation there according to Charles I's wishes; his determined and authoritarian approach achieved some successes, while making many enemies. In 1639 he was summoned back to London, made Earl of Strafford, and became the King's chief councillor. His advice on raising an army to suppress the Scottish rebellion, and take a hard line on parliamentary dissent, led to his becoming the focus of anger in the deteriorating relations between court and parliament, and in 1641 he was executed, after Charles allowed the act of attainder passed by the House of Commons to be enacted.

Retrieved from ‘https://bookowners.online/index.php?title=Thomas_Wentworth_1593-1641&oldid=15477’
Categories:
This page was last modified on 3 August 2020.
Content is available under CC BY-NC 4.0 unless otherwise noted.