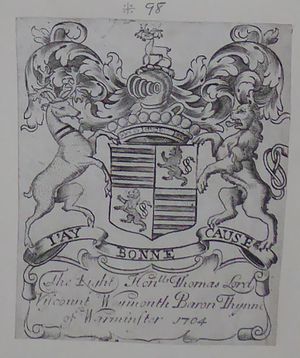 Of Longleat, Wiltshere, the eldest son of Sir Henry Frederick Thynne, first baronet (1615-1680). Matriculated at Christ Church, Oxford in 1657 but did not graduate. Fellow of the Royal Society in 1664, envoy to Sweden 1666-69 and MP for Oxford University 1674. Created Baron Thynne and Viscount Weymouth in 1682. He married Lady Frances (d.1712), daughter of Heneage Finch, third earl of Winchilsea and with her had three sons.

Thynne acquired the manuscript collection of his former teacher, William Burton. He bequeathed £40,000 to four granddaughters, £1000 for the building of a church in East Woodland, Frome, and paintings to the earls of Rochester and Nottingham. A vast number of his books are still to be found at Longleat House today.

Retrieved from ‘https://bookowners.online/index.php?title=Thomas_Thynne_1640-1714&oldid=23953’
Categories:
This page was last modified on 5 December 2022.
Content is available under CC BY-NC 4.0 unless otherwise noted.