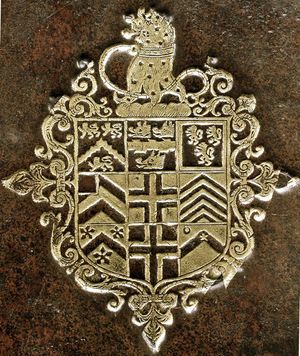 Son of Sir John Smythe of Ostenhanger and Ashford, Kent, High Sheriff of Kent, from whom he inherited a considerable estate. Made a Knight of the Bath in 1625 and 1st Viscount Strangford (in the peerage of Ireland) in 1628.

Smythe’s books are identified from his gilt-tooled armorial stamp on the covers; his books do not have other inscriptions or annotations that are demonstrably his.

Retrieved from ‘https://bookowners.online/index.php?title=Thomas_Smythe_1599%3F-1635&oldid=23625’
Categories:
This page was last modified on 22 September 2022.
Content is available under CC BY-NC 4.0 unless otherwise noted.