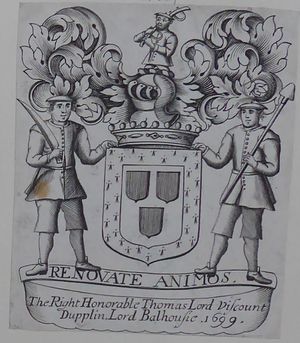 Son of Peter Hay of Rattray, Perthshire, younger brother of George Hay, 1st Earl of Kinnoull. He was designated the heir to the 6th earl in 1697, taking the title of Viscount Dupplin, eventually succeeding his cousin as Earl of Kinnoull in 1709.

He was a member of the Scottish Parliament from 1693 to 1697 and as a peer from 1698. He was one of the Commissioners for the Union with England and subsequently served as one of the elected Scottish peers in the British House of Lords. He was briefly imprisoned in Edinburgh Castle in 1715 as a Jacobite suspect.

Examples of early printed books with these bookplates in various libraries are mentioned in a Princeton University Library blog (2011).

Retrieved from ‘https://bookowners.online/index.php?title=Thomas_Hay_1660-1719&oldid=21067’
Categories:
This page was last modified on 15 November 2021.
Content is available under CC BY-NC 4.0 unless otherwise noted.