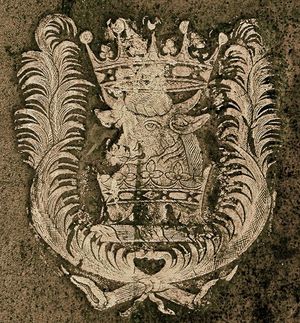 Born at Donington Park, Leicestershire, son of Ferdinando Hastings, 6th Earl of Huntingdon, from whom he inherited the title in 1656. He was educated at home. He moved to London in 1677 and became actively involved in politics, winning the favour of both Charles II and James II. Captain of the King’s Band of Gentlemen Pensioners 1682, privy councillor 1683, chief justice in eyre of the royal forests 1686, commissioner for ecclesiastical causes 1687. He remained loyal to James II, forfeited all offices in 1689, and was imprisoned in the Tower during 1692 on suspicion of supporting a Jacobite plot.

All the 17th-century Earls of Huntingdon had armorial bindings stamps; only a few books are known with the stamp of the 7th Earl. Examples: BL C.67.g.10, NAL CLE KK5.

BL C.67.g.10 has the armorial stamp gilt-tooled on the covers but has no inscriptions or annotations ascribable to Huntingdon; it was acquired second-hand and has the earlier inscription of a Berkshire clergyman (Thomas Wilkinson), dated 1648.

Retrieved from ‘https://bookowners.online/index.php?title=Theophilus_Hastings_1650-1701&oldid=21048’
Categories:
This page was last modified on 6 November 2021.
Content is available under CC BY-NC 4.0 unless otherwise noted.