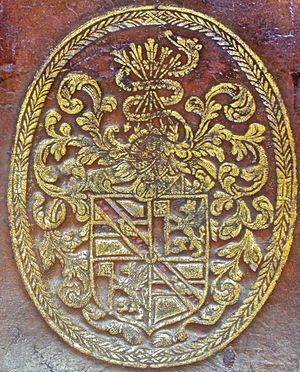 Elwes gave 184 books to Trinity in 1626-30, chosen (according to the note in the donors’ book) on the grounds of usefulness or as likely to be difficult to find; we do not know what proportion of his entire collection this represented. The contents were largely theological, with a mixture of other subjects, including history. The only mention of books in his will (which is largely concerned with monetary bequests) was a dispensation to Thomas Comber (Master of Trinity, d.1654) to keep those books of Elwes which he had; the residue of goods and chattels was left to his brother Jeremy. Books with Elwes’ armorial are found in various libraries outside Trinity. Examples: Trinity College D.15.25, K.17.6; Lincoln College, Oxford N.1.13; Chetham’s Library G.7.26; Durham Cathedral Library E.III.34; NAL Clements P9; Maggs 1156 (1993)/42.

Elwes used two armorial stamps. They are found on many of the books given to Trinity College, sometimes with part of the armorial hand-painted.

Retrieved from ‘https://bookowners.online/index.php?title=Sylvius_Elwes_1576-1638&oldid=21773’
Categories:
This page was last modified on 23 February 2022.
Content is available under CC BY-NC 4.0 unless otherwise noted.