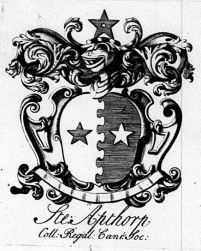 Born in Cambridge. Fellow of King's College, Cambridge 1732, BA 1733, MA 1736, DD 1749. He was foe many years a schoolmaster and fellow of Eton College for many years; he also held various parochial livings, including being vicar of Burnham, Buckinghamshire 1759-74, and rector of Worplesdon, Surrey 1774-90. He was a half-brother of the antiquary William Cole, with whom he travelled on the continent in the 1730s.

Apthorp used an engraved armorial bookplate, made when he was a fellow of King's College (Franks 642).The extent of his library is not known; his will has no mention of books (many of his goods and personal effects were left to his maidservant Hannah Lockwood.)

Retrieved from ‘https://bookowners.online/index.php?title=Stephen_Apthorp_1710-1790&oldid=21895’
Categories:
This page was last modified on 10 March 2022.
Content is available under CC BY-NC 4.0 unless otherwise noted.