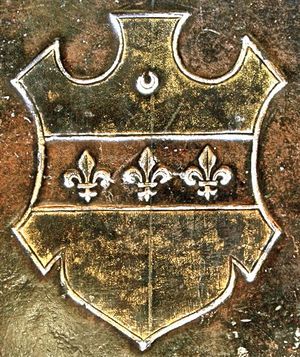 Probably the son of Sampson Lennard of Odiham, Hampshire. His education is not known, but he served as a soldier The Netherlands in the 1580s. He became Rose Rouge Pursuivant in the College of Arms in 1613, and was promoted to Bluemantle Pursuivant in 1616. As a herald, he undertook several visitations; he also published a number of translations of French and Italian texts.

Lennard is said to have compiled the oldest extant library catalogue in the College of Arms. In his will, he bequeathed all his books to his daughter and executor Dorothy Lennard (he had no sons); their subsequent disposition is not known, but some of his heraldic manuscripts are in the Harleian Collection at the British Library. A couple of books with his armorial stamp are recorded in the Armorials Database.

Retrieved from ‘https://bookowners.online/index.php?title=Sampson_Lennard_d.1633&oldid=21579’
Categories:
This page was last modified on 26 January 2022.
Content is available under CC BY-NC 4.0 unless otherwise noted.