Born at Croxton, Norfolk, son of Thomas Long. Educated at Norwich School, Norfolk, and admitted as a sizar at Pembroke Hall, Cambridge in 1697; B.A. 1701, MA 1704, ordained in 1716, and DD 1728. Elected Fellow of Pembroke in 1703, becoming its Master from 1733 until his death, and Vice Chancellor of Cambridge University 1733-4. He was elected a fellow of the Royal Society in 1729, and was also a member of the Spalding Gentlemen’s Society. He was Rector of Orton Waterville, Huntingdonshire from 1716-51, and Rector of Bradwell-on-Sea, Essex from 1751 until his death.

Famous for constructing a rotating sphere seating thirty which contained a planetarium, which remained in his college’s grounds until the late nineteenth-century, Long became the first holder of the Lowndean Professorship of Astronomy and Geometry, his principal work, Astronomy, in Five Books appearing in three instalments in 1742, 1764 and (posthumously) 1784. 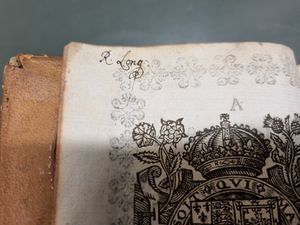 In his will Long bequeathed all his books to Pembroke library, ‘except such as I dispose of in my life time or by a note under my hand’. Duplicates were to be sold and the proceeds used by the library.

These and others given by Long to his college during his lifetime contain printed donation labels (Lee 1; 458).

Retrieved from ‘https://bookowners.online/index.php?title=Roger_Long_1680-1770&oldid=23902’
Categories:
This page was last modified on 29 November 2022.
Content is available under CC BY-NC 4.0 unless otherwise noted.