Born at Horton, Buckinghamshire. Fellow of King's College, Cambridge 1558, BA 1560, MA 1563, BTh 1569, DD 1576. After Philip Baker, the Marian pro-Catholic provost of King's was expelled in 1570, Goad was chosen by the fellowship to succeed him and he was installed as provost, where he remained until his death. He served three times as Vice-Chancellor (1576-7, 1595-6, 1607-8). He was drawn into numerous controversies as a senior member of the College, and of the University, generally seeking to impose the intellectual and behavioural discipline of moderate Calvinismand the established Church against challenges from Roman Catholicism, and from more radical puritanism. Towards the end of his time at King's he was said to be increasingly unpopular as a disciplinarian. 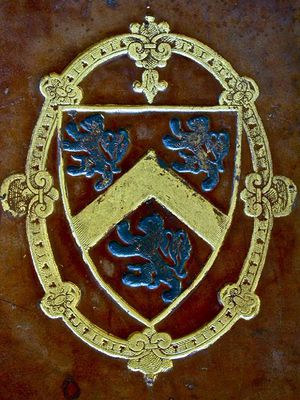 One of Goad's first acts as provost was the re-establishment of the College library, much depleted since the reformation, by selling church ornaments and vestments and creating a new library room within the chapel. The size of his personal library is not known, but is likely to have been appreciable for its time; in his will, he left all his divinity books to his second son Thomas (q.v.), who followed him in an academic career, while the rest of his books would have formed part of the residue of his estate left to his wife. A number of books survive today with his armorial stamp. Examples: NAL CLE N21, Harvard Houghton fSTC 12459, Maggs 1075/16.

Goad used an armorial binding stamp which is typically found applied in gold and silver.

Retrieved from ‘https://bookowners.online/index.php?title=Roger_Goad_1538-1610&oldid=20890’
Categories:
This page was last modified on 15 October 2021.
Content is available under CC BY-NC 4.0 unless otherwise noted.