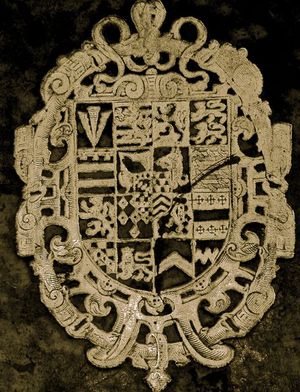 Born at Penshurst, the family home since 1552, second son of Sir Henry Sidney, and younger brother of the poet and soldier Sir Philip Sidney (1554-86). He was educated at Christ Church, Oxford and travelled abroad before serving as a soldier and governor in The Netherlands in the 1580s and 90s. Raised to the peerage by James I, he became Earl of Leicester in 1618 and increasingly turned to literary and estate pursuits at Penshurst. His son Robert inherited the title and estates in 1626.

Sidney gave £100 to the newly-founded Bodleian Library for the purchase of books, ca.1600. The Sidney family library at Penshurst began to be developed in the 16th century but was substantially built up by the 1st and 2nd Earls. We do not know the size of the library by the time of the 1st Earl’s death, but a series of commonplace books demonstrate a wide range of reading, and a few books of his, some in handsome bindings, survive in various libraries. A catalogue of the Penshurst library compiled by Gilbert Spencer in the 1650s/60s lists ca.4800 volumes, showing the extent of its growth under the 2nd Earl. The published account of the library by Warkentin and others, which includes speculation as to how it might have been housed, comments on the breadth and eclecticism of the library, with up to date publications in various European languages, on many subjects.

After the 2nd Earl’s death it was less augmented by later family members. The whole collection was sold by the 7th Earl in 1743 to the London bookseller Thomas Osborne, who promptly dispersed it via a series of sales for which no catalogues survive. Only a small number can be traced today, in various libraries around the world. Examples: Bodleian J-J Sidney 183, Gough gen.top.214, Chetham’s Library DD4 28 18124.

Many of the books acquired at Penshurst during the 17th century were not inscribed or otherwise marked, which is why so few can be traced today. A number of books with armorial stamps associated with the 1st Earl are recorded in the Armorials Database (some of these relate to the books bought for Oxford); the 5th Earl had a bookplate made dated 1704 (Franks 28696-7, *41, *56).

Retrieved from ‘https://bookowners.online/index.php?title=Robert_Sidney_1563-1626&oldid=16409’
Categories:
This page was last modified on 11 August 2020.
Content is available under CC BY-NC 4.0 unless otherwise noted.