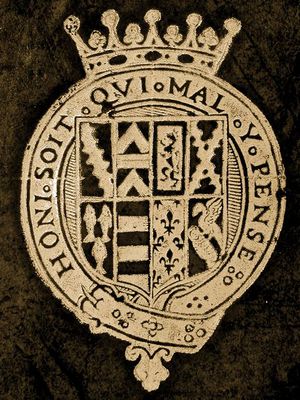 Son of Henry Radcliffe, 4th Earl of Sussex (1533-1593). Soldier and courtier. He married Bridget (d.1623), the eldest daughter of Sir Charles Morison of Cassiobury, Hertfordshire; their reputation as literary patrons is signified by dedications made by Robert Greene, Henry Lok and Emanuel Ford. Succeeding his father as Earl of Sussex in 1593, he served as ambassador to Scotland for Queen Elizabeth and in the Earl of Essex's Cadiz expedition. He received the Order of the Garter and was made colonel-general of the foot in 1599. Although initially implicated in Essex's rebellion, he escaped further repercussions. In 1603 he was appointed Lord Lieutenant of Essex 1603 by James I, a position he held until his death.

A book with his armorial stamp is in the British Library.

Retrieved from ‘https://bookowners.online/index.php?title=Robert_Ratcliffe_1573-1629&oldid=22745’
Categories:
This page was last modified on 24 June 2022.
Content is available under CC BY-NC 4.0 unless otherwise noted.