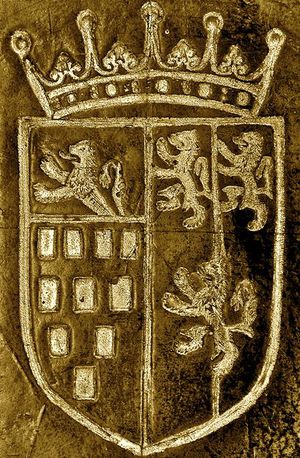 Son of Sir William Dormer, baronet, a member of a wealthy landowning family with estates in Buckinghamshire and Oxfordshire; he inherited a great fortune at an early age. MA Exeter College, Oxford 1627, having previously taken a grand tour taking in not only France, Spain and Italy but also Turkey and the near east. Created Viscount Ascott and Earl of Carnarvon 1628. He was noted as a wealthy playboy, with houses in London and Wing, Oxfordshire, with a regular presence at Charles I’s court. He was a strong supporter of the King when the Civil War broke out and became a successful commander of troops in a number of battles and sieges, noted for his courage and military skill, including Edgehill (1642) and Roundway Down (1643). He was killed at the first Battle of Newbury.

One book is known with a gilt armorial stamp of Dormer on the covers (BL C.66.e.17), but as this is a Book of Common Prayer (1621) it is likely to have come from a family chapel and there is no evidence of a library as such.

Retrieved from ‘https://bookowners.online/index.php?title=Robert_Dormer_1610%3F-1643&oldid=20583’
Categories:
This page was last modified on 17 July 2021.
Content is available under CC BY-NC 4.0 unless otherwise noted.