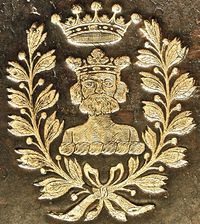 Son of Montagu Bertie, 2nd Earl of Lindsey, from whom he inherited the title and family estates in 1666. His education included a European tour including France and Italy, 1647-52. He was MP for Boston, Lincolnshire, 1661-66, and held a variety of court and local administrative posts, including Lord Great Chamberlain, and recorder of Lincoln, Stamford and Boston.

A number of books with an armorial stamp attributed to him, showing the Bertie crest with an earl's coronet. The extent and disposition of his library is not known.

Retrieved from ‘https://bookowners.online/index.php?title=Robert_Bertie_1630-1701&oldid=15422’
Categories:
This page was last modified on 3 August 2020.
Content is available under CC BY-NC 4.0 unless otherwise noted.