Born in London, son of Reginald Heber, clergyman, from whom he inherited property in Yorkshire and Shropshire in 1804. BA Brasenose College, Oxford 1796, MA 1797, DCL 1822; he was unsuccessful in standing for election as an MP for Oxford University in 1806, but was elected in 1821. He travelled extensively on the continent, and held various offices (he was sheriff of Shropshire in 1821). He was involved in establishing the Athenaeum Club in the early 1820s. Famous in his lifetime for his book collecting, he had a wide range of literary and cultural acquaintances, and numerous scholars and authors sought his help (or the loan of some of his books) to advance their work; he was not an author himself, and a project to produce an edition of Persius, begun in his teenage years, was never completed. His social reputation suffered during the last decade of his life from rumours that he was homosexual.

Heber is perhaps the most famous and oft-cited exemplar of early nineteenth-century bibliomania, and of book collecting on an epic scale. He began buying books as a teenager, perhaps as early as the age of 10 (spending sums which earned his father’s disapproval), intending initially to develop a library of classical texts, but he soon outgrew that ambition and created a library which ranged widely across all subject fields.. He often owned multiple copies, and the saying is attributed to him that a bibliophile needed 3 copies of any book – one for the collection, one to read, and one to loan to friends. He bought books steadily throughout his life, sometimes acquiring whole libraries, and by the time of his death he was reckoned to own at least 150,000 volumes, spread across houses in England, France and Belgium. He bought books at most of the significant book sales of the early 19th century, including those of John Ker, Duke of Roxburghe, Edmund Malone, George Steevens and George Spencer, Duke of Marlborough, and was a founder member of the Roxburghe Club. T. F. Dibdin dedicated his Bibliomania: or, book-madness to Heber in 1809; in the later editions of this, Heber is characterised as Atticus, an obsessive book buyer but also a companiable conversationalist who was generous in giving access to his library.

Heber left no directions in his will for the disposal of his library, and it was auctioned after his death in a series of sales held 1834-37, generating 13 printed catalogues in London plus further sales in Paris and Ghent. The English sales generated over £56,000, and more was raised through the continental ones, but it was noted that the financial return was considerably less than Heber was reckoned to have spent on buying the books during his life. The library primarily comprised printed material, but there were also over 1700 manuscripts, many of which were acquired by the British Museum, the Bodleian Library, or Sir Thomas Phillipps. 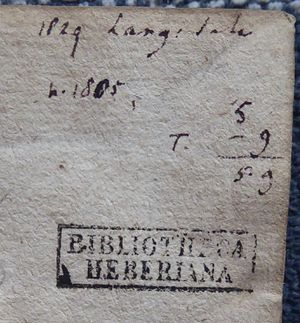 Heber's inscription, with the ink stamp beneath, from the flyleaf of S. Rolliard, Agrocharis, 1598 (private collection)

Heber’s books are most commonly recognised by the presence of a small rectangular ink stamp, usually on an endleaf, “Bibliotheca Heberiana”. These stamps were added after Heber’s death to the books which were thought more valuable, and although this covered many thousands of volumes, many more were not thus stamped. His books can often be recognised by the presence of his inscription at the front, in a tiny but distinctive hand, noting the source of the book (often a sale) and price paid.

Retrieved from ‘https://bookowners.online/index.php?title=Richard_Heber_1774-1833&oldid=23278’
Categories:
This page was last modified on 17 August 2022.
Content is available under CC BY-NC 4.0 unless otherwise noted.