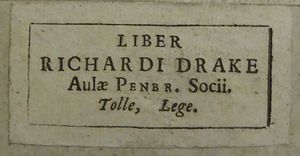 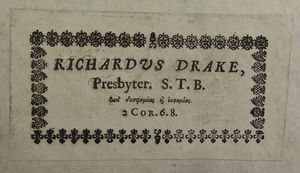 In his will, Drake bequeathed his folio and quarto books jointly between Pembroke College, Cambridge and Salisbury Cathedral, with the former having first choice; he also gave books to Pembroke in the 1630s. His will also directed that his son Charles receive his mother's Bible. The fate of his smaller format books is not specified; they would have passed with the residue of his estate to his son Roger. Numerous books from his bequests survive today in Pembroke, and at Salisbury. Examples: Pembroke College, Cambridge 5.16.6, 5.16.9; Salisbury Cathedral A.2.3-13, M.1.6.

Drake regularly inscribed his books with his name, and often a date and mention of his circumstances (e.g. Fellow of Pembroke, Chancellor of Salisbury), and sometimes a Greek motto. He also used more than one printed book label. Many of his books, in both places, are in simply blind-tooled bindings typical of Cambridge work of the middle of the 17th century. A number of books given to Pembroke in the 1630s have a gilt armorial stamp on the covers, incorporating the arms of Drake, and the College - these seem likely to have been added to the books to mark the donation.

Retrieved from ‘https://bookowners.online/index.php?title=Richard_Drake_1609-1681&oldid=20591’
Categories:
This page was last modified on 17 July 2021.
Content is available under CC BY-NC 4.0 unless otherwise noted.