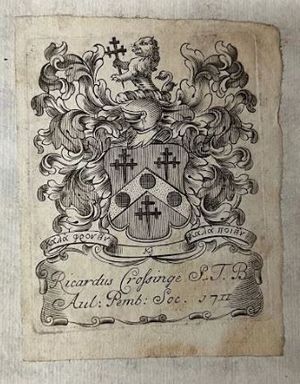 Crossinge's bookplate, from one of his books in Pembroke College

Son of John Crossing of Plymouth, mercer. BA Pembroke College, Cambridge 1691, fellow 1693, MA 1694, BD 1702, scrutator 1710, president in the 1720s and 30s. "Of all the fellows of his time, he seems to have been the one who most wholly identified himself with the college: from 1700 to 1735 he was never absent from the college for more than three or four days in any year" (Atwood). He published several doctrinal works and sermons.

Crossing used an engraved armorial bookplate, dated 1711, noting himself as a fellow of Pembroke (Franks 7463). In his will, he directed that some of his manuscript commonplace books should be given to other college fellows, on condition that they then bequeathed them on to other fellows. All his bookplated books were left to the college; any other books were to be sold. The Pembroke donors' register lists only a few titles given by Crossinge, but a separate card index of donated books, in the College Library, shows that ca.230 books were received. We do not know how many non-plated books were left to be otherwise disposed of.

Retrieved from ‘https://bookowners.online/index.php?title=Richard_Crossing_1669-1737&oldid=23064’
Categories:
This page was last modified on 9 August 2022.
Content is available under CC BY-NC 4.0 unless otherwise noted.