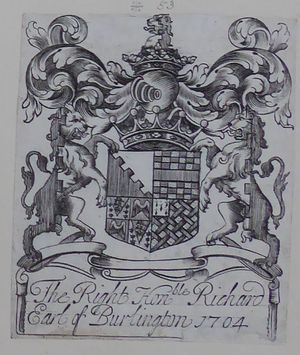 Son of Charles Boyle, 2nd Earl of Burlington and 3rd Earl of Cork, from whom he inherited the titles and family estates in 1704. He was educated at home. In 1715 he was made Lord Treasurer of Ireland (a country he never visited, despite having large landholding there), and thereafter held various administrative offices until he resigned them all in 1733, after a disagreement with George II. He is remembered principally for his interest in architecture, and as a patron of the arts; he designed, and built, numerous houses and gardens, and was a leading exponent of Palladianism in England. He was also a keen musician and supporter of composers and concerts, and had collections of paintings and sculpture. He became a Fellow of the Royal Society in 1722, and of the Society of Antiquaries in 1724.

Boyle also assembled a significant library, noted particularly for its comprehensive coverage of architecture. This was completed by an outstanding collection of architectural drawings. He was a major literary patron, and particularly friendly with Alexander Pope, whose 1731 poem Epistle to Burlington testifies to that. His ODNB entry notes that he regularly subscribed to forthcoming books, sometimes for multiple copies, across a range of subjects. he used an engraved armorial bookplate, in two sizes, dated 1704 (Franks *53/*62). His youngest daughter Charlotte, who married William Cavendish, 4th Duke of Devonshire, was his main heir and many of his collections were absorbed by the Devonshire library at Chatsworth, where much remains today, though some of the architectural drawings were given to the Royal Institution of British Architects in 1894.

Retrieved from ‘https://bookowners.online/index.php?title=Richard_Boyle_1694-1753&oldid=20201’
Categories:
This page was last modified on 4 June 2021.
Content is available under CC BY-NC 4.0 unless otherwise noted.