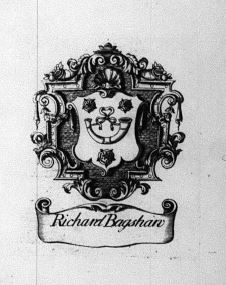 Born at Wormhill Hall, Buxton, Derbyshire, son of Adam Bagshaw, from whom he inherited the family estates in 1728. Few other details of his life are known.

Bagshaw used an engraved armorial bookplate, Franks 1134. The extent of his library is not known; his will has no specific mention of books (though he did include a charitable bequest "for teaching twelve poor children of Castleton to read and write the English language"), and is mostly concerned with distributing estates and money around his family. His eldest son Richard inherited all his goods and chattels.

Retrieved from ‘https://bookowners.online/index.php?title=Richard_Bagshaw_1675-1750&oldid=19577’
Categories:
This page was last modified on 30 April 2021.
Content is available under CC BY-NC 4.0 unless otherwise noted.