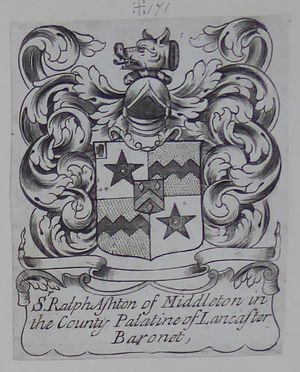 He was elected as Member of Parliament for Liverpool at a contested by-election in 1677. He was not re-elected in 1679, and he was out of Parliament for 15 years. He was removed from the commission of the peace in 1687, which suggests strong Anglican sympathies. He died on 3 May 1716 and was buried at Middleton.

Franks 171: Ashton, Sr. Ralph, of Middleton in the county Palatine of Lancaster, Baronet. (Arms. Ashton quartering Vavasour, with Hyde on an escutcheon.

Retrieved from ‘https://bookowners.online/index.php?title=Ralph_Ashton_1652-1716&oldid=19539’
Categories:
This page was last modified on 29 April 2021.
Content is available under CC BY-NC 4.0 unless otherwise noted.