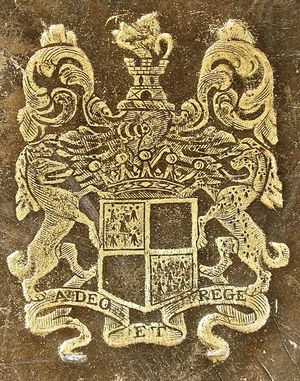 Born in the parish of St Mary Cray, Kent, son of Henry Stanhope, styled Lord Stanhope (d.1634). Matriculated at Leiden University in 1649 and travelled in Europe before returning to England in 1656 following the death of his grandfather. Appointed lord chamberlain to Queen Catherine of Braganza in 1652, made colonel of a foot regiment in 1667, DCL in 1669, steward of the honour of Tutbury in 1670 and elected fellow of the Royal Society in 1708

Books with his armorial stamp survive; he also used an engraved armorial bookplate (Franks *104). The extent and disposition of his library is not known.

Retrieved from ‘https://bookowners.online/index.php?title=Philip_Stanhope_1633-1713&oldid=22356’
Categories:
This page was last modified on 22 April 2022.
Content is available under CC BY-NC 4.0 unless otherwise noted.