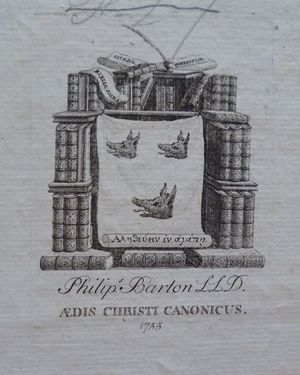 Barton used an engraved armorial bookpile bookplate, dated 1755 (Franks 1694); he also used a crest bookplate, not in Franks. He was a significant collector of coins and medals, beside his books, and he largely divided these between Winchester College, Christ Church and New College. His will refers to his gifts to the first two of these as having already been given (probably shortly before his death), but contains extensive provision for the coins and books to be given to New College, specifying that they must be catalogued and kept in a separate, and regularly audited, cabinet. About 50 numismatic books were received by New College, and many of his books remain today in the Fellows' Library at Winchester College.

Retrieved from ‘https://bookowners.online/index.php?title=Philip_Barton_1694/5-1765&oldid=23982’
Categories:
This page was last modified on 5 December 2022.
Content is available under CC BY-NC 4.0 unless otherwise noted.