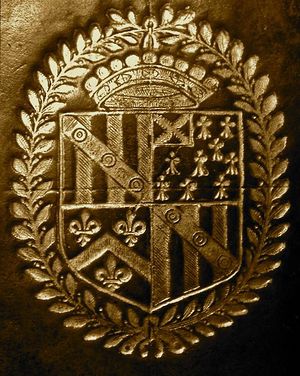 Son of Nicholas Saunderson, Lincolnshire MP and landowner, who was created Viscount Castleton (in the peerage of Ireland) in 1627. Matriculated Queen’s College, Oxford 1610, but did not graduate; admitted at Lincoln’s Inn 1613. Inherited the viscountcy when his father died in 1631.

Saunderson’s interest in books is known only from the survival of a couple of books with his armorial stamp. The extent of his collection is not known. Examples: Cambridge UL Syn.6.63.32.

The Cambridge University Library book has the armorial in gilt on the covers of an otherwise plain calf binding of the period, with a partially eradicated inscription “Castleton pret[?] 6s 1637/[???]”

Retrieved from ‘https://bookowners.online/index.php?title=Nicholas_Saunderson_1593-1640&oldid=23629’
Categories:
This page was last modified on 22 September 2022.
Content is available under CC BY-NC 4.0 unless otherwise noted.