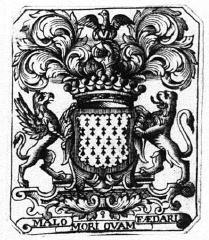 Son of Henry Barnewall, 2nd Viscount Barnewall, and a member of a prominent Irish Roman Catholic family, whose own father was given the title in the Irish peerage by Charles I. Nicholas inherited the title and family estates as an infant, as his father died just after he was born. He entered the army as a captain of dragoons in 1688, and the following year took his seat in the Irish House of Lords. Fighting for James II at the Battle of the Boyne, he was outlawed for a while before being allowed to return to public life; in 1692 his lands and titles were formally returned but his attempts to play a full role in Irish political and parliamentary affairs were frustrated by his refusal to take all the necessary oaths to William III and George I. He petitioned regularly for greater tolerance of Roman Catholicism in Ireland. 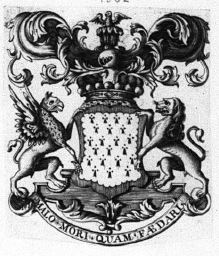 Barnewall used an anonymous engraved armorial bookplate (Franks 1561); the extent of his library is not known but it will have passed to his son, Henry Benedict Barnewall, 4th Viscount Barnewall (1708-74); another anonymous bookplate of similar design and date, displaying the Barnewall arms, is attributed in the Franks catalogue to the 4th Viscount (Franks 1562).

Retrieved from ‘https://bookowners.online/index.php?title=Nicholas_Barnewall_1668-1725&oldid=19684’
Categories:
This page was last modified on 3 May 2021.
Content is available under CC BY-NC 4.0 unless otherwise noted.