Member of the Bankes family of Kingston Lacy, Dorset, married to SirJohn Bankes 1589-1644?John Bankes and mother of John and Ralph Bankes.

Only a few books now at Kingston Lacy can be traced back to Sir John’s time, although he is likely to have had a library. Some high quality late 16th century bindings are thought to have come from his original library at Corfe Castle. John (the son), Ralph and Mary were all active book purchasers throughout the middle decades of the 17th century and their books form the foundation of the present library at Kingston Lacy. Their books cover a range of subjects and languages and are predominantly contemporary 17th century publications (i.e. they appear not to have acquired many 16th century books), in fairly plain bindings of the period, with a few exceptions of more upmarket work. The collection seems to have gone through a period of little growth between the late 17th and late 18th centuries (i.e. after Ralph’s death), and books were certainly dispersed after 1677. Examples: primarily at Kingston Lacy. 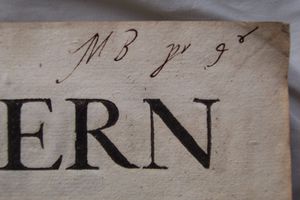 Initials of Mary Bankes, on the titlepage of L. Andrewes, A pattern of catechisticall doctrine (1641), Kingston Lacy, Dorset

John and Ralph regularly inscribed their names on titlepages, sometimes with prices and other acquisition details; endleaves were commonly used for notes which may be in the language of the text (e.g. Italian notes, and Italian forms of name, in Italian books). Some books are marked as belonging to Mary.

Retrieved from ‘https://bookowners.online/index.php?title=Mary_Bankes_1598-1661&oldid=19619’
Categories:
This page was last modified on 1 May 2021.
Content is available under CC BY-NC 4.0 unless otherwise noted.