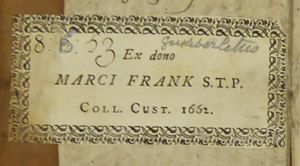 Born at Little Brickhill, Buckinghamshire, son of Humfrey Frank, rector there. BA Pembroke College, Cambridge 1631, fellow 1634, MA 1635, BD 1641. He was ejected from the College in 1643, having refused to take the solemn league and covenant, and his whereabouts during the Interregnum are unknown; he is known to have had connections with the community at Little Gidding. At the Restoration he became chaplain to William Juxon, Archbishop of Canterbury and in 1660 was made archdeacon of St Albans and canon treasurer of St Paul's. He was elected Master of Pembroke in 1662. A collection of LI sermons of his was published posthumously in 1672. The building of a new chapel at Pembroke, financed by Matthew Wren, then Bishop of Ely, was begun during Frank's Mastership though he did not live to see its completion in 1665.

In his will, Frank bequeathed "all the pieces I have of Cornelius Lapide" to Thomas Pomfret, vicar of Luton (d.1705). Otherwise, all his books were left to Pembroke College, with the proviso that they had liberty to exchange any which were already held. Ca. 360 volumes were received.

Retrieved from ‘https://bookowners.online/index.php?title=Mark_Frank_1612-1664&oldid=20818’
Categories:
This page was last modified on 30 August 2021.
Content is available under CC BY-NC 4.0 unless otherwise noted.