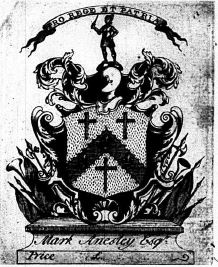 Son of William Anesley of Gallow Hill, Northumberland. Matriculated at Christ's College, Cambridge 1720, but did not graduate. He was later a JP for Northumberland but his finances were not well managed, and his estates were sold after his death.

Anesley used an engraved armorial bookplate in the Trophy style (Franks 546); Anesley had no known military connections, but Latcham suggests he may have had some militia attachment. Unusually, the plate has a space at the base for a price of the book to be inserted (the same design was used for the plate of another north-eastern owner, Thomas Middleton). The extent and disposition of Anesley's library is not known.

Retrieved from ‘https://bookowners.online/index.php?title=Mark_Anesley_ca.1702-1749&oldid=19523’
Categories:
This page was last modified on 27 April 2021.
Content is available under CC BY-NC 4.0 unless otherwise noted.