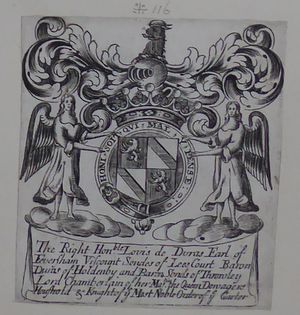 Born at Duras, Guyenne in France, son of Guy Aldonce de Durfort, marquis de Duras. He came to England in the early 1660s in the service of James, Duke of York; he was naturalized in 1665 and made Baron Duras in 1673. By marrying Mary Sondes in 1675 he came to inherit the title of his father in law George Sondes, 1st Earl of Feversham, becoming the 2nd Earl in 1677. He remained active in court and diplomatic affairs, and was made a privy councillor when James became King in 1685; he commanded the royal forces at the Battle of Sedgemoor later that year. He made peace with William III, and continued to play a part in state business, becoming particularly involved in managing the affairs of Charles II's widow, Queen Catherine of Braganza.

Feversham used an engraved armorial bookplate (Franks *116); the extent and disposition of his library is not known. His will has no specific mention of books; the residue of his estate, after debts were paid, was to be divided between his neice Charlotte de Bourbon and nephew Frederick William de Rochefoucoult, Earl of Lifford.

Retrieved from ‘https://bookowners.online/index.php?title=Louis_Duras_1641-1709&oldid=20653’
Categories:
This page was last modified on 6 August 2021.
Content is available under CC BY-NC 4.0 unless otherwise noted.