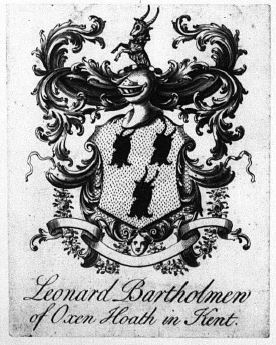 Little is known of this man beyond the fact that his wife Elizabeth, sister of Sir Borlase Miller, 2nd bart (d.1714) inherited a house and estate at Oxon Hoath, Kent where they lived for the last 6 years of their lives (both dying in 1720).

Bartholomew commissioned an engraved armorial bookplate sometime between 1714 and 1720 (Franks 1670). We do not know the extent of his library, but have some insight into it from an inventory associated with the legal dispute surrounding the 1714 inheritance, which includes, in the Study, "five common prayer books; a large Bible; Lord Clarendon's history, three volumes in folio; a large common prayer book; and the rest of the books". The library will have passed to Leonard's son Philip (d.1727) and eventually to the Geary family who inherited the estate in 1757.

Retrieved from ‘https://bookowners.online/index.php?title=Leonard_Bartholomew_1656/7-1720&oldid=19713’
Categories:
This page was last modified on 3 May 2021.
Content is available under CC BY-NC 4.0 unless otherwise noted.