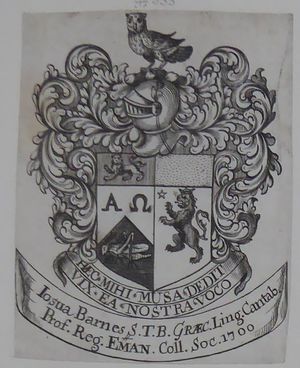 Son of Edward Barnes of St Stephen, Coleman Street parish, London, a tailor. Admitted a servitor of Emmanuel College, Cambridge 1671, BA 1675, fellow 1678, MA 1679, BD 1686. A Greek scholar and antiquary, Barnes was made Regius Professor of Greek at Cambridge in 1695 but, as the university grew increasingly hostile to his pro-Stuart sympathies, he grew closer to Oxford scholarly circles and became friends with the likes of Edward Bernard, Francis Cherry, and Thomas Hearne. In 1700 Barnes married a Mrs Mason, a widow of Hemingford, near St Ives, Huntingdonshire and was married to her until his death in 1712.

Barnes used an engraved armorial bookplate dated 1700 (Franks 1537/*533); the extent of his library is not known. The papers of Thomas Hearne include a list of Barnes's unpublished works, many of which can be found in Emmanuel College library.

Retrieved from ‘https://bookowners.online/index.php?title=Joshua_Barnes_1654-1712&oldid=23284’
Categories:
This page was last modified on 18 August 2022.
Content is available under CC BY-NC 4.0 unless otherwise noted.