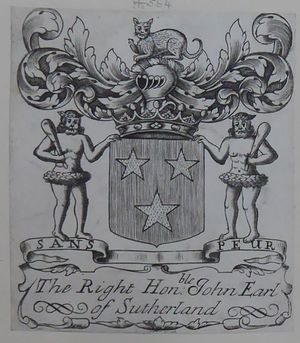 The only son of George Gordon, 15th earl of Sutherland (1633–1703), and his wife, Jean (d. 1715), the daughter of the 2nd earl of Wemyss and the widow of Archibald Douglas, earl of Angus. Previously called Lord Strathnaver, he succeeded to the earldom on the death of his father in 1703. He was active in support of the accession of William and Mary in 1689. He was appointed a privy councillor by William III, under whom he had commanded a regiment of infantry in Flanders. Sutherland was appointed a privy councillor by Queen Anne and supported the union between England and Scotland as one of the commissioners for arranging its terms. He was a representative peer in the British parliament between 1707 and 1708 and from 1715 until his death. He commanded troops in the campaigns against the Jacobite uprising in 1715 and was rewarded by George I.

Retrieved from ‘https://bookowners.online/index.php?title=John_Sutherland_1661-1733&oldid=19657’
Categories:
This page was last modified on 2 May 2021.
Content is available under CC BY-NC 4.0 unless otherwise noted.