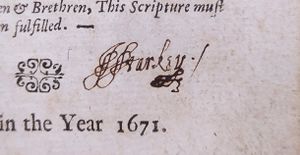 Starkey directed, in his will, that his books be sold, with the money raised divided between his two sons William and John, and his daughter Jane Atkinson. His library was auctioned in London, 11.10.1694. The sale catalogue contains 619 lots, divided only in a number of sequences by format, without separating them out by subject or language. 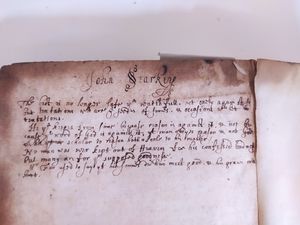 The inscription and MS notes of John Starkey in Lambeth Palace Library A60.10/C17.

A number of Starkey's books have been identified in the Sion College collection at Lambeth Palace Library, all of which are listed in the sale catalogue of his library. Examples: A22.4/F62 The fulfilling of the Scripture, or An essay shewing the exact accomplishment of the Word of God in his works of providence, performed & to be performed; A60.10/C17 Capel's Tentations : their nature, danger, cure; C60.5/B33 Baxter's Certainty of the worlds of spirits and consequently, of the immortality of souls; and A22.4/F62 The faithfulness of God: considered and cleared in the great events of his vvord.

Retrieved from ‘https://bookowners.online/index.php?title=John_Starkey_1627%3F-1694&oldid=23779’
Categories:
This page was last modified on 15 November 2022.
Content is available under CC BY-NC 4.0 unless otherwise noted.