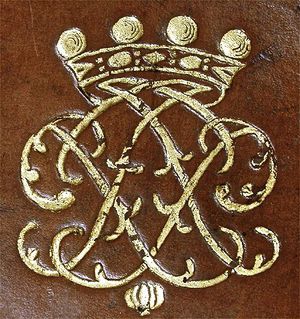 The first of Poulett's book stamps, with a baronial coronet (British Armorial Bindings)

Son of John Poulett, 3rd Baron Poulett, from whom he inherited the title and family estates in 1679 (though he took up his seat in the House of Lords only in 1702). In 1702 when Anne came to the throne he was made a privy councillor, and lord lieutenant of Devon. He was a friend and supporter of Robert Harley, Earl of Oxford, and served in his government. After Anne's death and the accession of the Hanoverians, he became much less involved in politics. He was elected a fellow of the Royal Society in 1706, the year in which he was also made the 1st Earl Poulett.

Poulett used two armorial book stamps, the first reflecting his rank as Baron Poulett and the second made after 1706 and his elevation to the earldom, and numerous examples of books with these stamps are recorded in the Armorials database. The extent of his library is not known; his will is largely concerned with property and has no specific mention of books, which would have been inherited (with the rest of his goods and chattels) by his younger son Anne (1711-85).

Books with Poulett's armorial stamp which have been seen do not carry any inscriptions, annotations or other markings beyond the armorial stamp.

Retrieved from ‘https://bookowners.online/index.php?title=John_Poulett_ca.1668-1743&oldid=23345’
Categories:
This page was last modified on 28 August 2022.
Content is available under CC BY-NC 4.0 unless otherwise noted.