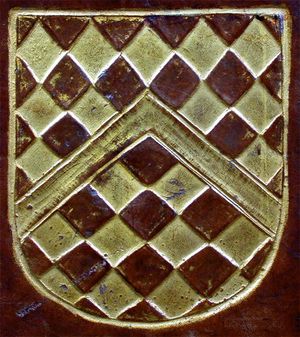 Son of the American colonist and army officer Sir Ferdinando Gorges, of Somerset, and a member of a gentry family which produced numerous MPs and men active in public affairs in the 17th century. Little is known of John, who is recorded as having been an MP for Taunton in 1654 and refers to himself in his will as living in Westminster, though holding property in Somerset.

The identification of John as the family member associated with an armorial stamp found on a number of surviving books is based on the signature ("Jo:") found in several. His will refers to "a cabinet of writings of and belonging unto me with all my maps and pictures likewise", which together with "all my jewels plate books [and] my wearing apparel" were left to his son Ferdinando. Examples: National Art Library CLE DD3, Durham Cathedral Library H.IX.45, University of Virginia A1640.L34.

The armorial stamp of the Gorges arms is found gilt-stamped on bindings which also have the inscription "Jo: Gorges" on the titlepage and possibly elsewhere. NAL CLE DD3 also has the motto "En Gregi honos es" inscribed twice, some early underlining and marginal notes towards the beginning of the text, and occasional pencil marks and crosses elsewhere.

Retrieved from ‘https://bookowners.online/index.php?title=John_Gorges_1593-1656&oldid=20921’
Categories:
This page was last modified on 20 October 2021.
Content is available under CC BY-NC 4.0 unless otherwise noted.