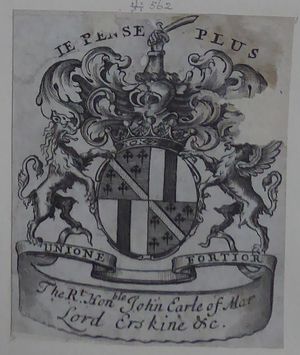 Born on the family estate in Alloa, Clackmannanshire, eldest child of Charles Erskine, 21st or 5th Earl of Mar (1650–1689), whom he succeeded in 1689. Member of the Scottish Parliament from 1696, he was appointed colonel of a regiment of foot (1701–1706). He played a prominent role in the negotiation for the Treaty of Union, having been appointed secretary of state in Scotland. After the accession of George I in 1714, he became one of the leaders of the 1715 Jacobite uprising, commanding the army at the battle of Sheriffmuir. He then went into exile for the rest of his life.

He was known as a patron of the arts and especially as a landscape gardener, designing splendid grounds at Alloa.

Retrieved from ‘https://bookowners.online/index.php?title=John_Erskine_1675-1732&oldid=18774’
Categories:
This page was last modified on 10 February 2021.
Content is available under CC BY-NC 4.0 unless otherwise noted.