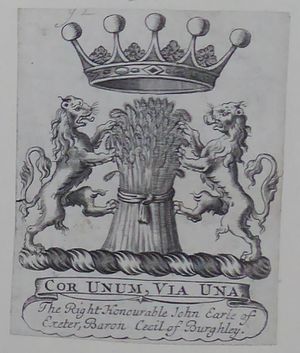 Son of John Cecil, 4th Earl of Exeter, from whom he inherited the title and family estates in 1678. Matriculated at St John's College, Cambridge but did not graduate. MP for Northamptonshire 1675; he was noted as an art collector, and purchased many paintings during various trips to Europe during the 1680s and 90s. He became a nonjuror after 1688.

Cecil had several engraved armorial boookplates made (Franks *61, *92, 5460); a plate was also made for his wife Anne. The extent of the family library at the time of his death is not known.

Retrieved from ‘https://bookowners.online/index.php?title=John_Cecil_ca.1648-1700&oldid=17162’
Categories:
This page was last modified on 26 August 2020.
Content is available under CC BY-NC 4.0 unless otherwise noted.