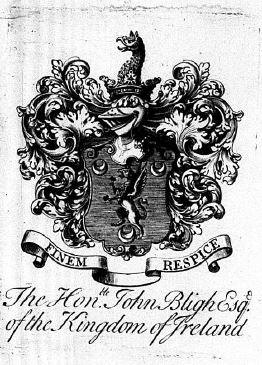 Son of Thomas Bligh, a member of a family originally from Plymouth who moved to County Meath, Ireland during the 17th century to make their fortune. MP for Athboy in the Irish House of Commons, 1709-21, when he was made Baron Clifton in the peerage of Ireland, later becoming Viscount Darnley (1723), then the Earl of Darnley (1725). Through his marriage to Theodosia Hyde, 10th Baroness Clifton (1695-1722) he acquired the estate of Cobham Hall, Kent which became a family seat thereafter. 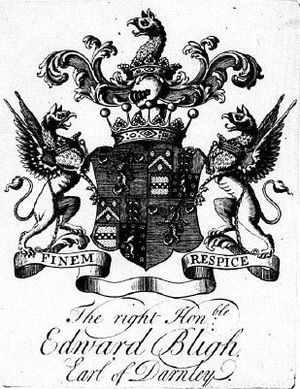 The Franks catalogue ascribes an armorial bookplate for "The Honble. John Bligh Esqr. of the Kingdom of Ireland" (Franks 2834) to Bligh's son John, later 3rd Earl of Darnley (1719-81), but on stylistic grounds this looks too early, and earlier than the plate for his eldest son Edward the 2nd Earl (1715-47: Franks 2833). It therefore seems safer to attribute it to the 1st Earl. The extent of what presumably became a family library, over the generations, is not known.

Retrieved from ‘https://bookowners.online/index.php?title=John_Bligh_1687-1728&oldid=19830’
Categories:
This page was last modified on 9 May 2021.
Content is available under CC BY-NC 4.0 unless otherwise noted.