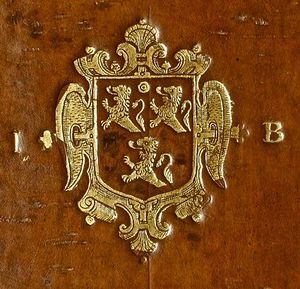 Born in Westminster, son of John Bennet. BA Christ Church, Oxford 1680, MA 1683, and went on to study medicine. His Constantius the apostate (1683) was a contribution to the debate around Samuel Johnson's Julian the apostate (actually an attack on the succession of the Roman Catholic James II to the throne); Bennet opposed Johnson.

Several books with Bennet's armorial stamp and initials "I B" survive in Christ Church Library (as all the known books are there, this may have been a donation or bequest?).

Retrieved from ‘https://bookowners.online/index.php?title=John_Bennet_1657-86&oldid=15420’
Categories:
This page was last modified on 3 August 2020.
Content is available under CC BY-NC 4.0 unless otherwise noted.