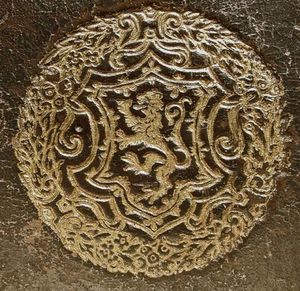 Illegitimate son of James V (1512-1542) and Margaret Erskine (d.1572), the daughter of John Erskine, 5th Earl of Mar. He was the half-brother of Mary Queen of Scots, and served as Regent of Scotland for her infant son James VI & I, from 1567 until 1570. He was appointed Prior of St Andrews in 1538. Moray attended St Leonard’s College, St Andrews from 1545, and briefly continued his studies in France in 1548, a country which he visited frequently after accompanying Mary there in 1550.

Though the Catholic crown initially had his allegiance, in 1559 Moray joined the Protestant (and anti-French) Lords of the Congregation, and henceforth became a central figure in the Scottish Reformation. He supported Mary’s return to Scotland after she accepted his Protestant religious policy, and defended her right to hear mass in her chapel. In 1562, he was made Earl of Mar, and married Agnes Keith, eldest daughter of William Earl Marischal. In September 1562, he was granted the earldom of Moray. He openly rebelled against Mary after her marriage in 1565 to Henry Stewart, Lord Darnley, and conspired against her with the English for the rest of her reign. After Mary’s abdication and imprisonment at Loch Leven, Moray was appointed Regent. He was assassinated by James Hamilton of Bothwellhaugh, in Linlithgow.

Approximately one hundred volumes from Moray’s library survive, the majority of which are in the University of St Andrews. Moray made two gifts of his books to St Leonards, the first of which was given before 1560, identified by his inscription as Lord James, Commendator Prior of St Andrews (“ex dono Jacobi stewart commendatarii prioratus Sanctiandree filii illustrissimi principis Jacobi quinti Scotorum Regis”). The books are mostly Aristotelian commentaries, but also include works of mathematics. His second gift was made between 1567 and 1570, with volumes recognisable by their armorial bindings and inscription styling Moray as the Regent of Scotland (“ex dono serenissimi principis Jacobi Stewarti Scotorum proregis”). Notable among this bequest is the Erasmian folio editions of the Church Fathers, and the works of numerous Protestant theologians such as Peter Martyr and Johannes Brenz. The second gift is particularly interesting when considered in the context of Moray’s conversion. Three of his books are known to have passed on his death to his Privy Councillor, the Justice Clerk, Sir John Belleden of Auchnoull (d.1576). Examples of Moray’s Library: University of St Andrews Roy PA3893.M6T and National Library of Scotland Ry.III.c.31(1)

The majority of Moray’s books were bound in France. Many of the armorial bindings are in calf, with raised bands and spine panels decorated with gilt flowers/and or vines, with boards decorated with gilt frames, and Moray’s armorial stamp in the centre. This is often accompanied with his name “IACOBVS STEVARD” and “C.P.S” (Commendatarius Prioratus Sanctiandreae) in gold tooling above, with his motto SALVS PER XPM below. Doherty identified several crude bindings where the gold tooling was likely done in Scotland. Moray used two stamps. His half-brother John, Prior of Coldingham used the same armorial stamps, and after Moray’s death, stamp 2 was used by a binder without any meaning of ownership.

Retrieved from ‘https://bookowners.online/index.php?title=James_Stewart_1531/2-1570&oldid=23289’
Categories:
This page was last modified on 22 August 2022.
Content is available under CC BY-NC 4.0 unless otherwise noted.