James Hamilton was born to Hans Hamilton (1535/6-1608) and his wife Jonet Denham, daughter of James Denham, laird of West Shield, Ayrshire. He was likely educated at the University of St Andrews and gained a reputation as a significant scholar. In 1587, he became a schoolmaster in Dublin where he also acted as an agent for James VI. Whilst in Dublin, Hamilton was appointed a Fellow of Trinity College when it was founded in 1592; he held the post of Bursar in 1598.

Hamilton played a role in the negotiations for James VI to succeed Elizabeth I. In 1605, a grant settled upon him the lordship of Upper or Southern Claneboye and the Great Ards in County Down in partnership with another the king’s favourites and Conn O’Neill, the Gaelic chieftain and former lord. In 1609, Hamilton was knighted. In 1622, he was created Viscount Claneboye. He served as a privy councillor and was elected M.P. for County Down in 1613.

Hamilton built a house at Bangor in County Down. His third wife was Jane (d.1661), niece of Arthur Chichester, 1st Baron Chichester and Lord Deputy of Ireland. She was mother to Hamilton’s heir, James Hamilton, 2nd Viscount Claneboye and 1st Earl Clanbrassil (d.1659).

A significant number of learned books in Latin, Greek, and Hebrew, which likely belonged to Hamilton remain in the library at Castle Ward, County Down. These originated at the great Continental presses of the sixteenth and seventeenth-centuries. Provenance information firmly connecting these with Hamilton is rare. Amongst the works thought to have belonged to Hamilton, there is a clear interest in classical learning. 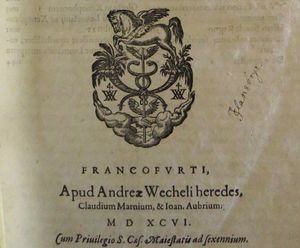 Hamilton appears to have rarely signed or annotated his books.

Retrieved from ‘https://bookowners.online/index.php?title=James_Hamilton_c.1560-1644&oldid=22983’
Categories:
This page was last modified on 13 July 2022.
Content is available under CC BY-NC 4.0 unless otherwise noted.