Babington was a significant donor to the building developments at Trinity College after the Restoration, including support for Nevile's Court in the 1680s. He was also closely involved in the building of the Wren Library, partly in overseeing some of the work but also in subscribing £100 in 1676, and providing more money for the southern extension in 1681, on condition that he could occupy rooms there and that rental income from the space would subsequently be applied to the purchase of library books. Babington’s arms were subsequently included as one of the armorials carved by Grinling Gibbons to decorate the presses, for which he paid a further £25.

Babington’s will included a bequest to Trinity College of his “Collection of mapps that I have putt together according to that method that Doctor Heylin hath used in his Geography”; it also refers to “setts of musicall books” already given to the College. He bequeathed books to the value of £10 to the Town Library of Leicester, and in establishing a charitable foundation in the parish of Barrow, Leicestershire, in memory of his uncle Theophilus Cave, included a stipulation that money be spent annually on Bibles, to be given to poor children, bound with “The gift of Theophilus Cave” on the covers in gilt letters.

The bulk of Babington’s books were sold by auction in Cambridge, 12 July 1692. The sale catalogue includes 865 lots, plus 52 volumes of tracts, divided into Latin books (465) and English (400), not further subdivided other than by format (i.e. not by subject). The collection included a typical mix of theology, history and classics with a sprinkling of science, literature and other material. Ca. 15% of the books were 16th-century imprints, with the remainder spread across the 17th century. Examples: British Library 3104.c.9; Emmanuel, Cambridge S1.2.21. 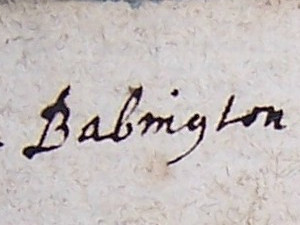 The Babington books which have been traced have his name, and the price and date of acquisition, in a small neat hand in the top right hand corner of the titlepage. There are no annotations.

Retrieved from ‘https://bookowners.online/index.php?title=Humphrey_Babington_1615-1692&oldid=19572’
Categories:
This page was last modified on 30 April 2021.
Content is available under CC BY-NC 4.0 unless otherwise noted.