Son of Sir Henry Yelverton, Baronet, of Easton Mauduit, Northamptonshire; in 1679 he inherited the title of 15th Baron Grey of Ruthin. Matriculated Christ Church, Oxford 1680, but did not graduate. Supported William of Orange during his invasion in 1688, and in 1690 was created Viscount de Longueville. Gentleman of the Bedchamber to Prince George of Denmark, 1702-04.

Yelverton amassed a substantial library, whose extent is not known, but many volumes are traceable today in libraries around the world, in English, Latin, Italian and Spanish, with imprints from the early 16th century to the late 17th. Edward Bernard's Catalogi manuscriptorum, 1697, lists him as owning 187 manuscripts, covering a wide range of historical and political affairs in England and Europe from the late middle ages to the 17th century.

In his will, he bequeathed his “library of books” to Christ Church, Oxford “at the time of the death of the last survivor of the issue male of my body”, unless either of his sons reached the age of 21, in which case the legacy to Christ Church was revoked, and the fate of the library was then left “entirely to his disposing”. As both his sons attained their majority (his elder son Talbot, 1690-1731 would have been 21 in 1711), the library remained in the family and apparently began to be dispersed in the late 18th century. Examples: British Library C.21.a.51, 1488.d.7, Cambridge UL Rel.a.61.2, Durham UL R.IV.A.3, Wellcome EPB 1310/D/1, Houghton Library fSTC 22790b. 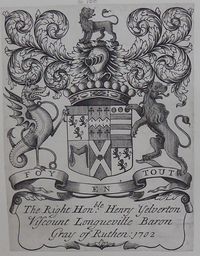 Yelverton’s books are generally recognisable from his binding stamp, the letters HL surmounted by a Viscount’s coronet, placed in blind or gilt at the centres of the boards. This stamp was often applied to books irrespective of their binding when acquired, and there are numerous examples of the stamp found added to earlier decorated bindings, or placed over the initials of earlier owners. He also used two bookplates dated 1702, Franks *100 and *103. His wife Barbara, Viscountess de Longueville, also had a separate bookplate, similarly dated 1702 (Franks 32851/*96). He owned a number of books in elaborately decorated bindings (e.g. BL C.67.g.12, a Squirrel Binder centre-and-cornerpiece binding) and sometimes had decorative title labels added to earlier undecorated spines. Books with the HL stamp are also sometimes found with inscriptions of other members of the Yelverton family.

Retrieved from ‘https://bookowners.online/index.php?title=Henry_Yelverton&oldid=15968’
Categories:
This page was last modified on 7 August 2020.
Content is available under CC BY-NC 4.0 unless otherwise noted.