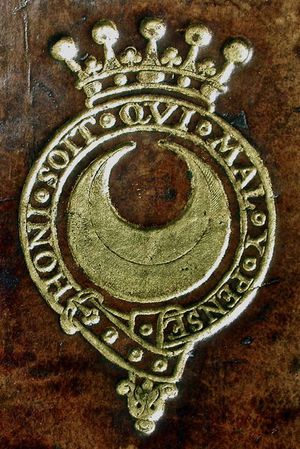 Born at Tynemouth Castle, son of Henry Percy, 8th Earl. Educated in England and through travel abroad; succeeded as Earl on the suicide of his father in 1585. Maintained a balance between the life of a landowner and a courtier through the 1590s. Made a privy councillor by James I, 1603, but soon fell out of favour; implicated by association in the Gunpowder Plot, through the direct involvement of his servant and cousin Thomas Percy; spent the years 1605-21 imprisoned in the Tower of London. On his release he retired to his estate at Petworth, Sussex. Known as the “Wizard Earl” for his acknowledged interest in science, alchemy and knowledge generally, he patronised contemporary scholars such as Walter Werner and Thomas Harriot.

Assembled a sizable library whose full extent is not known, but is estimated around 1500-2000 vols. His inventory on decease mentions “chests of books of all sorts 52, and to fill 12 small chests besides”, together with 44 folio books, 28 vellum books and 33 pamphlets in “the closet belonging to the old Earl’s chamber”. His surviving correspondence includes references to books, and their importance to him; household accounts show that he commonly spent ca.£50 p.a. on books. Bookbinders were employed at Syon House in 1609-10 “stamping of books”. At least 145 vols at Alnwick and 370 at Petworth can today be identified as from his collection; some Petworth books were dispersed via Sotheby’s, 23-24.4.1928, and examples are found in numerous libraries today. The subject content of the traceable books is wide ranging but is noteworthy for its strength in contemporary science, mathematics, medicine and alchemy. Gave £100 to the Bodleian Library in 1603, for the purchase of books. Examples: BL C.33.g.27, C.47.f.20, C.68.a.21; NAL Clements NN8; Bodleian H.7.12.Art.

Percy sometimes inscribed his name on titlepages; early inscriptions sometimes also include the family motto Esperence en dieu. Commonly annotated books, with underlining, marginal notes and notes on endleaves. Used two armorial stamps incorporating his badge of a crescent, within the Garter, with the coronet of an earl. The books were pressmarked in the 17th century according to a system of letter.number.number.

Retrieved from ‘https://bookowners.online/index.php?title=Henry_Percy_1564-1632&oldid=23214’
Categories:
This page was last modified on 10 August 2022.
Content is available under CC BY-NC 4.0 unless otherwise noted.