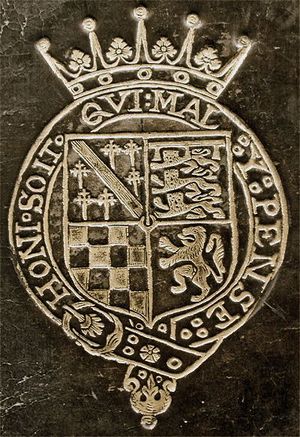 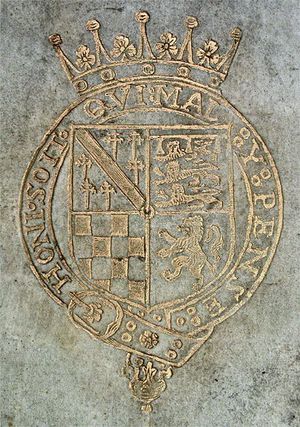 Born at Shottesham, Norfolk, second son of Henry Howard, Earl of Surrey, who was executed for treason in 1547. The family’s attainder was formally reversed in 1559. MA King’s College, Cambridge 1566, after which he stayed in Cambridge to teach and continue studying. He was out of favour, and suspected on involvement in conspiracies, for much of Elizabeth’s reign, but attached himself to the Earl of Essex in the 1590s. He established better relations with James I and played a prominent role in political life during the first decade of his reign as an influential courtier and office holder (Warden of the Cinque Ports 1604, Lord Privy Seal 1608, Commissioner of the Treasury 1612). He was made Earl of Northampton in 1604, and a Knight of the Garter the following year. Howard is noted as one of the most learned aristocrats of his time, with contacts and friends among contemporary circles of academics and antiquaries. He published a number of political and theological tracts, and wrote the text, issued in the King’s name, to accompany the royal proclamation against duelling (February 1614).

Howard assembled a significant library, whose contents and size are not recorded, but which was purchased in its entirety for £529 by his great-nephew Thomas Howard, 2nd Earl of Arundel, in 1615. The great house that he built in London between 1603 and 1614, Northampton (later Northumberland) House in the Strand, included two library rooms, on the ground and second floors. Most of his books became part of the Arundel House library which was given to the beneficiary Royal Society in 1667 by the 6th Duke of Norfolk, and which was largely dispersed during the 20th century. Examples: BL C.65.c.16, C.67.d.13; Brasenose, Oxford UB/S.III.19.

Howard used two armorial stamps, of identical design but slightly different in size, which are commonly found on his books.

Retrieved from ‘https://bookowners.online/index.php?title=Henry_Howard_1540-1614&oldid=21220’
Categories:
This page was last modified on 28 November 2021.
Content is available under CC BY-NC 4.0 unless otherwise noted.