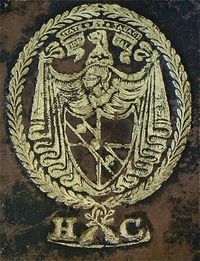 Son of Thomas Chitting, of Ickworth, Suffolk. His early career is unrecorded, but he is thought to have benefitted from the patronage of Sir Nicholas Bacon; he became Chester Herald in 1618, and undertook numerous visitations. He was admitted to Gray's Inn in 1633.

A few books with Chitting's armorial stamp survive; the extent and disposition of his library is not known.

Retrieved from ‘https://bookowners.online/index.php?title=Henry_Chitting_1580-1638&oldid=20314’
Categories:
This page was last modified on 20 June 2021.
Content is available under CC BY-NC 4.0 unless otherwise noted.