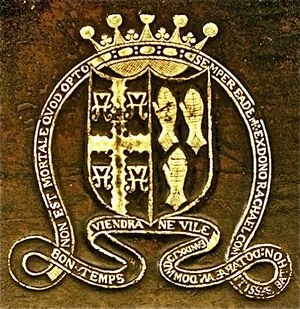 Born in Ireland, son of Sir George Bourchier, a younger son of John Bourchier, 2nd Earl of Bath. BA Trinity College, Dublin 1605, fellow 1606, MA 1610. He inherited Irish estates from his father but moved to England ca.1620; he was appointed to a commission of inquiry on the affairs of the Virginia Company in 1623. He became Earl of Bath on the death of his cousin Edward, 4th Earl, in 1637. During the 1640s he became increasingly, but reluctantly, involved in the royalist cause; he was sent to Devon (where the family estates lay) to raise forces for the King, but was given a very hostile reception, and his subsequent military activity was ineffective. He was appointed Keeper of the Privy Seal in 1644. He was sequestrated by Parliament and compounded for release in 1649, after which he retired to the Devon estate at Tawstock, where he died.

Bourchier was described by Fuller as “a learned lord, and a lover of learning”, and his widow Rachel (1613-1680) gave books to the value of £200 to both Emmanuel College, Cambridge (in 1659) and Trinity College, Dublin (1671; these gifts were uniformly bound incorporating a stamp with her arms as Countess of Bath, and appear to have been specially purchased as donations). Bourchier’s library was sold shortly after his death following Rachel’s brief remarriage to Lionel Cranfield, 3rd Earl of Middlesex (according to an account of 1658, he sold “all her plate, most of the household stuff, and all Lord Bath’s library: all goes in rioting and play”). The size of his collection is not known, but books with his inscription are now found in various libraries. Examples: Cambridge UL Q*.11.16, All Souls, Oxford SR.41.a.5, Plume Library F.7.5, Marsh’s Library, Dublin A.6.32, L.1.1.23. 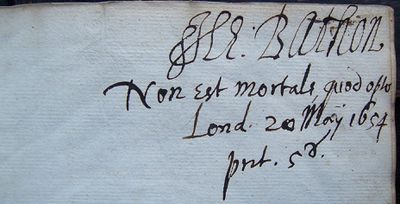 Bourchier typically inscribed his books with his name in the form He: Bathon, with the motto “Non est mortale quod opto”, sometimes adding details of the price and place of purchase.

Retrieved from ‘https://bookowners.online/index.php?title=Henry_Bourchier_ca.1587-1654&oldid=22623’
Categories:
This page was last modified on 23 June 2022.
Content is available under CC BY-NC 4.0 unless otherwise noted.