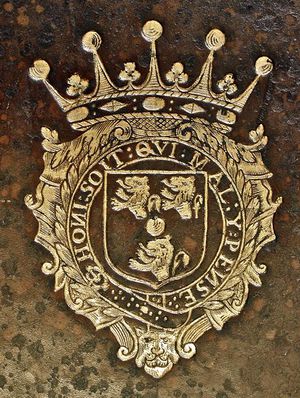 Son of Sir John Bennet, landowner, of Dawley, Middlesex. BA Christ Church, Oxford 1639, MA 1642. Briefly saw military action for the royalist army in 1644, after which he travelled extensively with the exiled court and served both Charles II and James, Duke of York. After return to England in 1661 he became Keeper of the King’s Privy Purse and was secretary of state for the south, 1662-74, combining that with several other offices. After an impeachment attempt in 1674 (which he successfully defended) he retired as secretary of state and became Lord Chamberlain, remaining at court (though with less political involvement) until his death. He was knighted in 1657, created Baron Arlington in 1665, and Earl of Arlington in 1672. He had a reputation for being cautious and insufficiently assertive, but he was successfully involved in affairs of state over a long period and he has also been perceived as intelligent, shrewd and talented.

Bennet was noted by John Evelyn as a great reader, “having both the Latin, French and Spanish tongues in perfection”, and a “library full of excellent books” at his country house, Euston Hall in Suffolk (bought in 1666 and subsequently redeveloped). Only twenty or so of his books can be readily identified today, generally found in mottled calf bindings typical of the 1670s and 80s, suggesting that he routinely had books rebound to achieve a uniform appearance. A number of these surviving books are in Italian and Spanish, testifying to his spread of languages. After his death, the bulk of his property passed to his daughter, Isabella, wife of Henry Fitzroy, Duke of Grafton. Examples: British Library C.67.e.5, C.68.a.2; Cambridge UL R.20.36, R.20.37, Bodleian 243.f.39, Beinecke HE48 12F.

Bennet used an armorial stamp typically used in gilt on the covers of his books, whose bindings otherwise have little cover decoration, but extensively gilded spines. His books do not carry any inscriptions or annotations by him.

Retrieved from ‘https://bookowners.online/index.php?title=Henry_Bennet_1618-1685&oldid=22063’
Categories:
This page was last modified on 27 March 2022.
Content is available under CC BY-NC 4.0 unless otherwise noted.