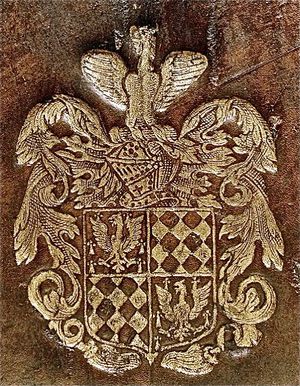 Son of Thomas Bedingfeld of Oxburgh Hall, Norfolk, a long-established gentry family there, who retained their Roman Catholic faith after the Reformation. He inherited the estate in 1590. Knighted ca.1604, he was MP for Norfolk in 1614, Sheriff of Norfolk 1620, and held various other local administrative offices; he and his family fought for the royal side in the Civil War, and suffered numerous losses. He fled abroad for a period in the early 1640s but after returning in 1646 he spent some time imprisoned, while Oxburgh Hall was confiscated and partially destroyed.

A small number of 17th century books survive in the library at Oxburgh Hall today, which are likely to have belonged to early members of the Bedingfeld family, but much was lost during the Civil War and its aftermath. Most of the books at the Hall today are of 19th-century origin. Many books were sold at Sothebys, 26.7.1922/561-612, with a further sale (over 2500 volumes), 31.10.1951.

A book with the armorial stamp of Sir Henry survives in the National Art Library (CLE K22).

Retrieved from ‘https://bookowners.online/index.php?title=Henry_Bedingfeld_1587-1657&oldid=19767’
Categories:
This page was last modified on 6 May 2021.
Content is available under CC BY-NC 4.0 unless otherwise noted.