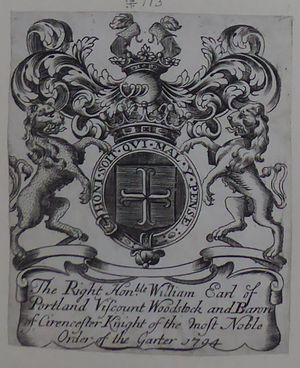 Born at Diepenheim in The Netherlands, a younger son of Berent Bentinck, lord of Diepenheim. After becoming a page to William III of Orange, later William III of England, he became a friend and confidant to the prince and travelled extensively with him. He was an important agent in negotiating William's move to England in 1688 and the offer of the crown. He was made Earl of Portland in 1689, given the estate of Theobalds, Hertfordshire, and was a key statesman in William's court thereafter. A key figure in European diplomacy during the 1690s, he retired from his offices in 1699.

Bentinck used an engraved armorial bookplate dated 1704 (Franks 2257/*113); the extent and disposition of his library is not known.

Retrieved from ‘https://bookowners.online/index.php?title=Hans_Willem_Bentinck_1649-1709&oldid=19780’
Categories:
This page was last modified on 7 May 2021.
Content is available under CC BY-NC 4.0 unless otherwise noted.